Over lunch time, I watched a Landline feature story on cane toads. Cane toads were introduced to Australia in 1935 to reduce the population of cane beetles. They’re now out of control: “The population is increasing at a rate of about 25% a year.” We’ve watched on in apprehension for years and they have finally invaded Kakadu National Park. They are now poised on the border of Western Australia.

The Landline story interviewed some Northern Territory residents who have banded together to fight the cane toad invasion on their community. On the outskirts of town, someone has set up a ‘detention centre‘. Each time a resident captures a toad, he or she drives to the detention centre and deposits the toad into the cage.

The detention centre manager comes along regularly to pour all the toads into a big clear plastic bag. As the toads wriggle over each other and frantically try to leap above their fellow detainees, the man inserts a short green tube and seals the bag around it. The bag quickly fills with a colourless gas. As the the bag expands, the toads gradually stop moving.

I thought it was hysterical.

Also hilarious is that staple of environmental sciences course, Cane Toads, the movie. It’s very funny and very Australian. My favourite bit is the scene with the swerving four-wheel drive. Go see it!

Updated 1:24 PM
This short animated film looks interesting. I haven’t seen it yet but I will download it — St Kilda Festival Best Comedy 2003, Cane Toad: What happened to Baz? 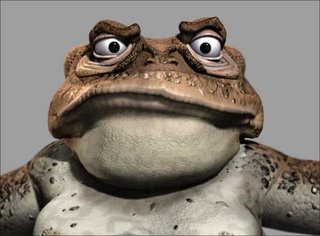