We were walking towards the York Minster when someone called, ‘Do you want ice-cream?’

Without breaking stride, I detoured to stand in front of Frankie’s Real Dairy Ice Cream cart.

‘Hmm…’ I considered the sign that said that I could have two scoops for the price of one. ‘Is it nice ice cream? I’ve had Italian ice cream before, you know.’ I was warning of him of my standards.

Frankie’s friend was a lanky redhead with quirky purple glasses. She was leaning against the cart. ‘Oh, yes!’ she said, nodding enthusiastically. ‘It’s the best! Look! He has raspberry ripple. Not many people have raspberry ripple.’

‘Hmm…’ I repeated. I peered into the ice cream buckets. ‘And how much is it for ice cream?’

‘One pound forty,’ said Frankie. ‘You get an extra scoop for free. You can choose any flavour!’

I thought about it. ‘I don’t really feel like ice cream, though,’ I murmured to myself. And Â£1.40 was not the bargain they made it out to be.

I stood there for another ten seconds before taking a step back. ‘Sorry. Thanks for the selling effort, though.’ I had disappointed them.

An hour later, after visiting the Minster and the Shambles, I found myself back within five metres of Frankie’s cart.

‘Whatever you want,’ they said indulgently.

I trotted up to the cart and announced, ‘I feel like ice cream now.’ I walked back to my parents with a double scoop of raspberry ripple and mint choc chip.

‘They were so excited to see you,’ mum laughed. ‘They must be happy to get a customer.’

I nodded gravely. ‘Half the reason I bought the ice cream was that I knew they would be happy.’ I licked the ice cream. It was yummy, although no ice cream in England — even the famous Cornwall ice cream — has been as good as Trampoline gelato in Melbourne.

Much later in the day, as we were walking towards dinner, I walked by the ice cream cart again. Frankie must have recognised my furry hat because he waved to me from across the courtyard. I waved back to my ice cream friend. 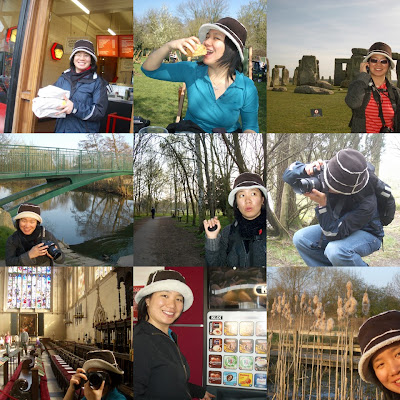