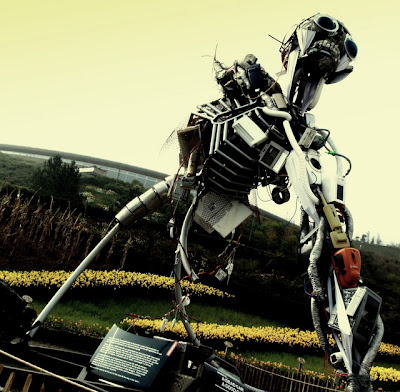 This sculpture was in the Outside Biome of the Eden Project. I really like it. It’s called ‘The WEEE Man‘. WEEE stands for ‘Waste Electrical & Electronic Equipment’, one of the more amusing acronyms in the sustainability field. It comes from the European Union WEEE Directive, which puts the responsibility of collecting and disposing of WEEE on the manufacturers.

The WEEE Man is made up of the amound and types of waste electrical and electronic products that an average UK citizen throws away in his or her lifetime. The sculpture is seven metres tall and quite impressive ‘in person’.

I was pleased with the explantory notes on the car bonnet next to the WEEE man. The writer had correctly identified that the greatest environmental impact in the lifecycle of a car is when it is being driven around. The manufacturing and disposal impacts are relatively minor. If you have an old bomb, you would be doing the environment a favour by getting rid of it and buying a more efficient new car.

This gives rise to the counter-intuitive notion that car manufacturers should design for performance, and limit a car’s durability. We don’t really want to let people drive around a ten or twelve year old car.