We had planned to have a good time on the Chinese New Year weekend in London. Damjan and I met up with Jon and Pey at Covent Garden on Saturday morning. Covent Garden is my favourite part of London. Only a few days ago, while watching the historical crime series City of Vice, I found out that Covent Garden was a seedy hotspot of brothels in the 1750s.

These days, it’s a centre for shopping, performing arts (the Royal Opera House borders the piazza) and street theatre. As Damjan likes to say, ‘It’s the only place where I’ve ever heard opera busking!’

Wikipedia says, ‘Today Covent Garden is the only part of London licensed for street entertainment with performers having to undertake auditions for the Market’s management and representatives of the performers’ union and signing up to timetabled slots.’

I do my hiphop dance lessons at Covent Garden. Damjan and I also have a favourite restaurant here called Food For Thought.

We took Pey and Jon around Covent Garden, then through Chinatown, which was gearing up for Sunday’s major Chinese New Year celebration. We then went to Trafalgar Square, which was also being tarted up for CNY. After popping into the National Gallery to see van Gough’s Sunflowers (I can’t see why this painting is so famous), we went to St James’s Park. The flag was flying over Buckingham Palace so the Queen was home.

Our London day tour ended with ice cream at Hyde Park and a home-cooked meal at my home.

The next day, Damjan and I took on ä¸­å›½åœ¨ä¼¦æ•¦ (China in London) celebrations in earnest, despite being warned about how crowded it would be. We started with lunch in Chinatown with Debra and John (Debra is a workmate of mine). For dessert, we bought opportunistically-overpriced Chinese pastries being sold on the main Chinatown drag.

Because shimmying through the CNY crowd was so tiring, we ducked into a French café, where I had my favourite French treat, mille fueille. It was the third one I have ever eaten (well, I’ve only ever eaten half of each so it was my 1.5th).

Rested, we battled through to Trafalgar Square, where we watched a rather strange Chinese/Western crossover band perform. After taking another break (in St James’s Park), we visited Hamley’s, the most famous toy store in London. It is six storeys of toys.

After dinner at Tuk Tuk in Soho (the present day red light district), Damjan and I ran to the station so that he could catch his train home. 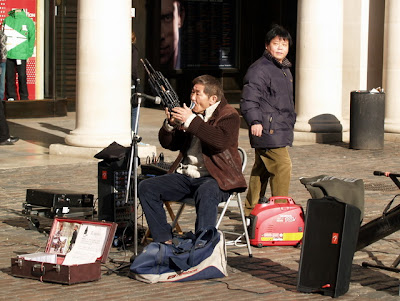 Setting the tone for the weekend, we listened to this fellow play the Chinese pipes (if you’re reading, mum, what is this?) while waiting for Pey and Jon to arrive. 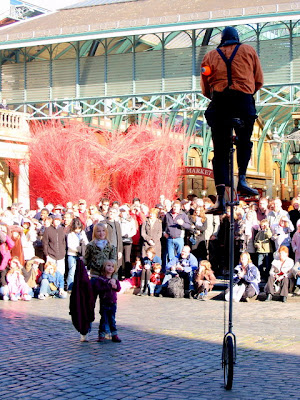 These street performers are very good at sucking in crowds. It’s always a ‘full house’. 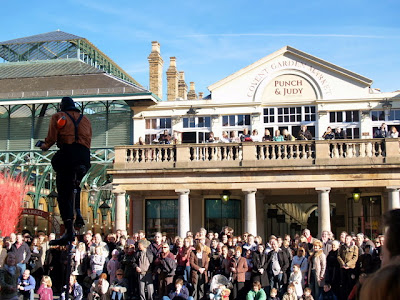 Covent Garden is where the first Punch and Judy puppet show was performed, as recorded by the famous blogger diaryist, Samuel Pepys. 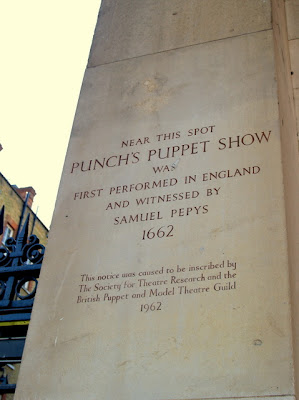 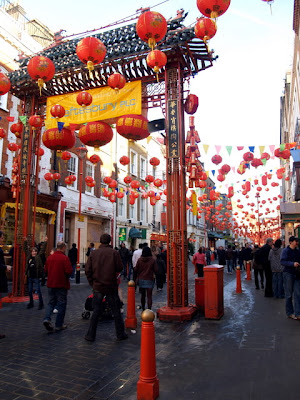 One of the gates to Chinatown. For a really big city, London has a disappointingly small Chinatown. 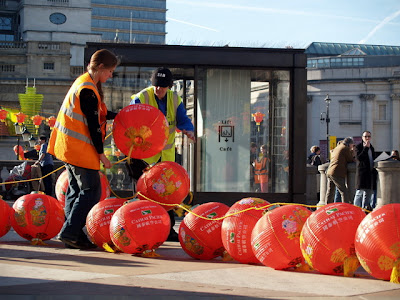 Here they are setting up Trafalgar Square for the party. 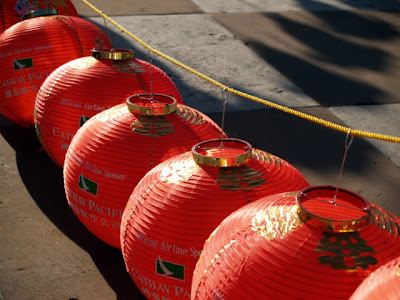 We wondered whether or not the lanterns get reused every year. I doubt it. Cathay Pacific probably had to pay a lot to sponsor the lanterns. 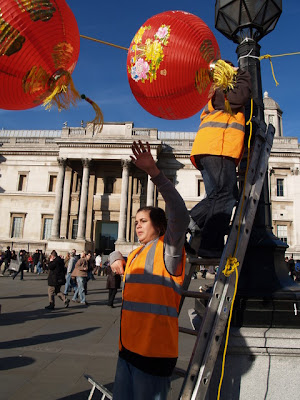 I feel a kinship with any woman in a high vis vest. 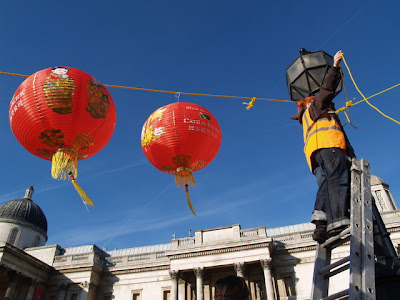 And here are the fruits of their labour — a packed out Trafalgar Square. 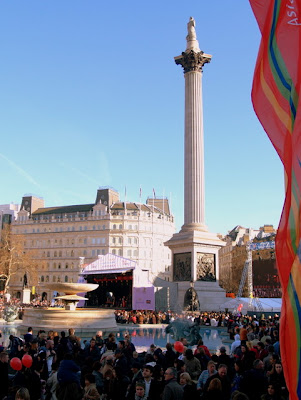 That’s Nelson’s Column. I believe it to be out of proportion to anything you might use as a reference in its surrounds. So it has to be said: Is someone compensating for something? 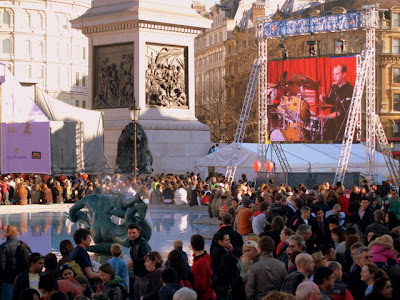 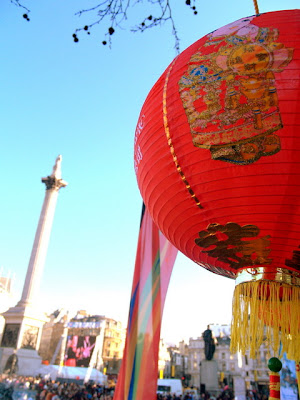