Somehow, a while back, I found out that banana plants were actually giant herbs. I told this to some people and they ridiculed me.

Wikipedia is, of course, the fount of all knowledge. Imagine my distress, then, when there was no mention of ‘herb’ in Wikipedia’s banana article.*

‘But it’s true…’ I said plaintively.

I started doubting my previous conviction. 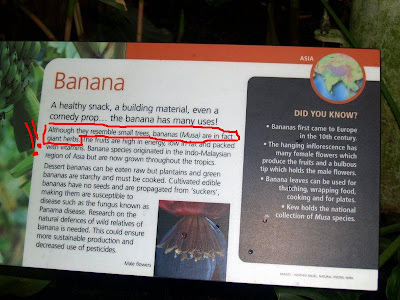 He said, ‘There is a disease killing all the bananas, you know. It’s gradually reducing the worldwide banana production.’

‘Really?’ I said. ‘I didn’t know that! It must be because all the bananas are clones of each other.’

Yap nodded. ‘In fact, due to this disease, some experts have announced that we have reached peak production.’ He paused. ‘It’s peak banana**.’

* The Wikipedia article on bananas now does have a reference to it growing from ‘herbaceous plants’ in the first line. I swear this wasn’t there when looked.

** I thought Yap was joking and I laughed hysterically. But I just now looked it up on Google and found that there are indeed people writing about peak banana.