As others will attest, when you sit at a desk all day (possibly bored), you end up snacking. This has a double whammy: because you’re sitting, you don’t get exercise, and because you’re snacking, you get fat.

I’ve struggled to find a sustainable eating regime. I’ve tried a bunch of things. Fruit is a good option when I want something sweet. I usually go through three pieces of fruit during the work day. The savoury snack question, however, has been harder to answer.

For about a week, I happily munched on cashews. Mum had bought raw cashews and roasted and salted them at home. I thought, “This is perfect! Cashews are tasty and nuts are good for you!”

Then, on Friday lunch time while web surfing, I discovered this: energy content of food.

I stopped eating cashews straight away.

For those of you who are interested, the way I’ve settled this is by eating five meals a day instead of three. I have First Lunch at around 10:30 AM (basically, whenever I feel hungry), Second Lunch at the normal lunch time and Third Lunch at about 3 PM. I eat quite a bit less and feel full the whole day to the point that I often don’t feel like eating Third Lunch.

If you’re wondering about the title of this post, I was introduced to scroggin at Grade 5 camp. It was delicious (at this camp, I also ate my first taco). I can’t remember the exact trail mix but the folklore says scroggin is made up of:

P.P.S. Hey! This is even more interesting! Wikipedia describes the origin of the dim sim. It was created by celebrity chef Elizabeth Chong’s father. It was invented! Wow. I had assumed some Australian fish-and-chip shop owner mangled a Chinese yum cha delicacy by deep frying it and mangled its name again by calling it ‘dim sim’!

P.P.P.S. Haha…! Tim Tam Slam. This article is as silly as Iron Chef. I like this line: “The thicker chocolate coating on the Double Coat Tim Tam offers a more stable exoskeleten to help ensure the biscuit does not collapse prematurely.”

Every day in northern Victoria is a clear day — no rain, no clouds. We get beautiful light this side of the mountains.

It would normally be something to enjoy, this spring holiday in the middle of winter. However, we’ve been working with farmers and I’m starting to understand what drought means to them.

“We’re hoping for rain real soon,” we were told a week ago. “There are farmers out there with their fields empty. It’s pretty much the end of the sowing season but they can’t sow anything without water. If they miss this season, it’ll be the second one in a row…”

Jamie and I walked down the corridor of the main building, towards the exit doors. We were suddenly surrounded by a constant tapping.

“What’s that sound?” I said, puzzled.

We arrived at the windows and saw streaks of movement flying down from the sky and exploding on the ground, turning light grey asphalt to dark grey. The dark grey began as splotches but soon turned into a uniform sheen. I saw clouds for the first time in the two months I’ve worked in Shepparton.

When we entered the next building, I felt the buzz of celebration.

“There will be a lot very happy people out there today.” 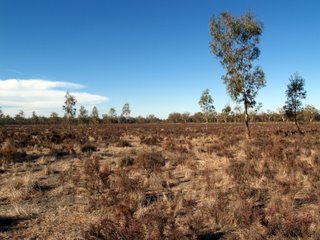 This is Lake Konardin in the Hattah-Kulkyne National Park. That’s right, it’s a lake.

The reason I haven’t posted anything for almost two weeks is that I spent last weekend in Mildura. I took lots of photos, many of which I am happy with. Please have a look at my photo album, From Shepparton to Mildura. 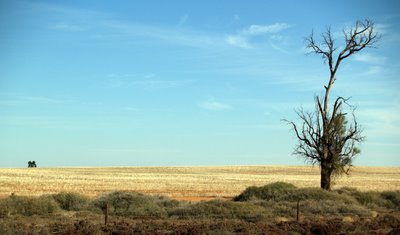 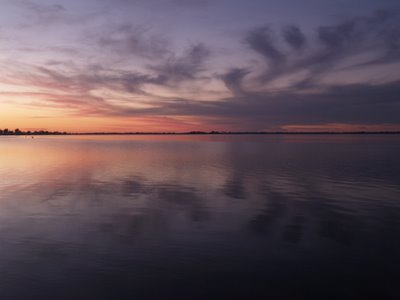 I’m glad I saw it before I have to leave Australia. I might miss these landscapes.

I came home from Shepparton yesterday and went to work in the city today. I really enjoyed myself. I was surrounded by friends. I laughed the whole day. I talked to people I had never met and they engaged me in conversation.

I passed a milestone last Friday. I went to my first ever Aussie Rules football match. I barracked for the Western Bulldogs against Collingwood. I had a good time and even got into it enough to yell, “Come on, Doggies!” It’s a fast and skillful game.

I passed another milestone last Thursday. I ate my first chicken parmi meal at a pub. I also got up in front of a crowd and sang karaoke. The song? I will survive by Gloria Gaynor.

I spent the New Years weekend in south-west Victoria. Mum, dad and I mobilised the extended family (11 people all up) for a three-day stay in Colac, a large rural town of 11 000 people. From Colac, we wanted to explore the Otway National Park.

Our plans went awry in a way that can almost only happen in Victoria.

We arrived on 31 December. We escaped a 43°C scorcher of a day in Melbourne. It reached 38°C in Colac. Trust me, that’s hot enough. It was too hot to go bounding over world class natural heritage. Instead, we drove to some nearby lakes, which seemed to have decided to celebrate the Australian heat by turning into salt pans. Damn, that twinkling was deceptive, though.

Then we went back to our cabins and watched DVDs. We rationalised that we could have a full day of National Parkness tomorrow.

We drove out early the next morning to our first scheduled adventure, the Otway Fly Tree Top Walk.

As we drove into the rainforest valley, my heart tightened as the fog turned into drizzle, which became a fully fledged downpour. We waited forlornly for a while but admitted defeat. There was no point climbing up the trees in rain and fog.

How strange it was, to go from a sleepless night of moisture-sucking dry heat, to being forced to huddle close to heaters, while rain boxed us into 35 square metres of caravan cabin.

Luckily, we had brought five DVDs and I had packed two books.

Our final day yesterday was 24°C. It was juuuuuust right.

I was introduced to a new part of Southbank yesterday, when I went salsa dancing at Alumbra. Southbank is one of my favourite parts of the city.

I went to my first ever cricket match yesterday. The scene for this milestone event was day 3 of the Boxing Day Test Match, Australia versus South Africa.

I went with Kate (also a cricket match virgin) and her boyfriend, Avi. Avi was my patient guide through the cricket maze.

“Avi, what does R/M/B stand for? What are ‘extras’? Under what circumstances do they swap batspeople? Was that a ‘six’? How come all the rowdy people are over there (in Bay 13)? Why is everyone getting up?”

Everyone was getting up because it was time for ‘drinks’. The strangest thing about the game was this oddly regimented series of intervals throughout the match. There was drinks (I think at 11:30 AM), lunch (12:30 PM), drinks (again, at 2:30 PM) and tea. It was all very civilised.

It was hot and I was losing interest. I kept missing the exciting bits, which happened maybe every 10 minutes. I would be talking to Kate, eating or staring into space, then suddenly there would be a collective stadium gasp or cheer. I ended up watching more of the match on the replay screen than on the pitch.

That night, I met Joel and Vera for some salsa dancing. Joel said, “I heard you went to the cricket, Joan. What was the score when you left?”

I looked at him blankly.

“How many wickets and runs?” he added, helpfully.

I realised the source of confusion. “That was South Africa’s score,” I explained.

I shrugged. “I left a bit after Drinks Part 2, actually. Didn’t get to find out what time tea was.”

Tony says that next time I should go to a One Day Match. They are reputedly more exciting — although Vera tells me that she fell asleep at one once. 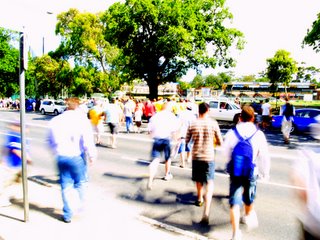 Crowd swarms towards the MCG on a hot day. 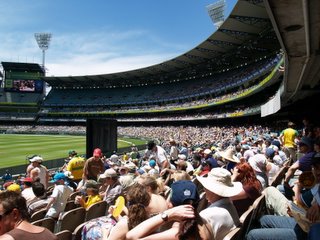 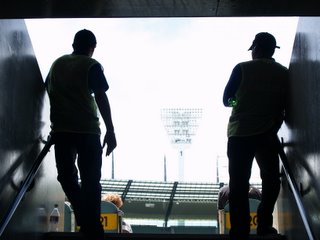 I’ve just come home from a week in Brisbane — my first business trip!

It was a really good week. I went with a colleague, Nuno. Nuno looked after me: he trained me while we tramped around military bases; he navigated our car through the obstacle course that was the hotel carpark; he made me go to the doctor when my toe had a severe reaction to the bandage. Nuno and I became good friends after the week.

Brisbane is a lovely city, cleaner than Melbourne, a bit quieter. It is a city of bridges. I like the way the Brisbane River snakes through the city. The one-way streets are sometimes frustrating, though.

I spent most of the week working so I didn’t get to be a tourist. We did, however, get a daily allowance for food, so Nuno and I ate our way around the city. Hot breakfasts were the highlight.

(I also saw a salsa class being conducted in a community hall. It’s funny how beginner salsa classes look the same everywhere you go.)

When British convicts came to Australia, they brought with them an enthusiasm for rhyming slang. The slang can be relatively straightforward (and lame) or convoluted and obscure (often lame but sometimes clever).

For example, “I’m wearing a bag of fruit (‘suit’) to the dinner dance on Friday.” And, “As soon as she’s finished up here, I’ll bet you she’ll Harold Holt.” (‘bolt’, as in depart quickly. Derived from an Australian Prime Minister, who disappeared while swimming in the sea, in 1967)

Various rhyming slangs are known, and have given the universe such terms as ‘apples and pears’ (stairs), ‘rubbity-dub’ (pub) and ‘busy bee’ (General Theory of Relativity).