A milestone! For the first time, I removed a friend from Facebook.

I have 373 friends on Facebook. I’m reasonably discerning about who I accept as friends. At minimum, I need to have had a face-to-face conversation with a person for at least five minutes. I need to have enjoyed the conversation. I don’t generally request friends, I only accept them.

However, one person has been a serial offender. Every week, he would send me (and probably everyone in his friend list) invitations to events that I can’t physically get to and in which I have never expressed interest. He sends political statements and links.

He’s one of those people that I’ve spoken five minutes with and who requested my friendship. I have now withdrawn my friendship because of his spamming behaviour.

I have five ‘first tier friends’. I’ve known this for a few years now. Sometimes, I am unwise enough to say aloud who they are but those people who aren’t first tier friends generally know this. I think it’s very rare that someone would consider you a first tier friend, while you think of them as a second tier friend.

Here is an interesting article from BBC Magazine — What’s the ideal number of friends? The article posits that the maximum number of ‘core’ or ‘Premier League’ friends a person has is between six and twelve.

‘A newspaper columnist once told of her shock when, having struck up a rapport with a man over dinner, she was told at the end of the meal he had no vacancies for friends. He was operating a “one-in, one-out” policy. Six months later she received a card stating he was now available for friendship.’

I will add one more feature to this theory of friendship. Like the United Nations Security Council, there are five permanent members of my first tier and one or two rotating members. At any one time, I feel close to a person that I am usually spending a lot of time with. These days, it’s often a work mate.

It may not be obvious at the time that this person is not a permament first tier friend but rather a rotating one.

Right now, though, this post is vacant. Apply within.

In this age of cheap no-frills flying, it seems extravagant that on the 2.5 hour flight from London to Lisbon, we were served breakfast.

I expected a bread roll — a packaged croissant, if we were lucky. Imagine my pleasure, then, in being handed a warm foil-wrapped package. I could smell something yummy inside.

I tore it open to find a toasted tomato roll. Well, actually, it was a toasted cheese and tomato roll but I didn’t find out until halfway through. In melting, the cheese must have sunk to the bottom.

Wolfgang and Rosangela showed me their silvery packages. They too had found a pool of cheese stuck to the bottom of the wrapper.

Wolfgang remarked, ‘They must heat the rolls standing up. It seems like a fundamentally silly thing to do. Don’t you think they would have worked it out by now?’

After three days working in Lisbon, Damjan flew in to join us on Friday night. He arrived at 11:30pm, a bit tired but ready to see the sights.

‘Have you had dinner yet?’ I asked.

‘Oh, enough,’ Damjan replied. ‘They gave us something on the plane. It was a ham and cheese roll.’

Wolfgang immediately asked, ‘And had all the cheese sunk to the bottom?’

Damjan looked startled. ‘Yes, actually! How did you know?’

Wolfgang, Rosangela and I just laughed.

What is this? Do you know?

Yes, indeed. Someone has come up with a nifty way to visually depict the relationships between my friends on Facebook. Every dot on the circumference of the wheel represents a friend. I’ve erased friends’ names, as well as mine in the middle.

You can see some interesting patterns. Recently, the network effect worked its magic amongst my high school friends from Melbourne. Consequently, that isolated patch of purple at 11 to 12 o’clock is the high school arc.

The pink arc at one o’clock is the beginnings of my university dancesport crowd. Facebook has only just started to ripple through them. I don’t think that blob will get any bigger, though. I didn’t have that many friends at uni 🙂

At 2 to 3 o’clock, the Friend Wheel application decided to place my un-networked friends. There are a couple of people from my university course, work, other courses, and truly random acquaintances.

Which leaves the mass of lines from 3 to 10 o’clock. This is, of course, the Cambridge arc of people who sucked me into Facebook in the first place. Now, as far as I’m concerned, there should be four main groups: my coursemates, my scholarship friends, dancing people, and college people.

However, it’s a mess. The Friend Wheel app has revealed how interlinked everyone in Cambridge is. I really shouldn’t be surprised that scholarship people dance, and that coursemates are in college with scholarship people.

Oh, there is also an interesting blue blob at around half past nine. That’s the Oxford dancesport people. Even though I don’t know them, many of them ‘friended’ me after I released photos from the Varsity Match in May. It’s very easy to make friends on Facebook. Currently, I have 212.

You would think that the lines that cross from one side of the circle to the other would represent the most unexpected relationships. They do to some extent. However, the application has chopped my scholarship group in half and the internal links there represent much of the crossover. Hmm, now that I look at the names, I don’t know why the application has done that. There’s an island of scholarship people at 10 o’clock. Also, for some reason, the Oxford group has bisected my coursemates (divide and conquer?).

Hehe. Kevin Rudd is at 4 o’clock, surrounded by Aussie mates. That’s right. I’m officially friends with Kevin Rudd. I looked, but John Howard‘s not on Facebook. Maybe he has a MySpace (read Viewing American class divisions through Facebook and MySpace).

Damjan suggested someone could make a Venn diagram application for friends. That’s the mental model I’ve always had for my friendship groups. I have Venn brain. However, now that I’ve seen what a mess that lines make, I think circles would be an impossible ask.

I arrived back from Cornwall at 8 PM. Gina offered me a lift home and as soon as I got there, I changed into some nicer clothes and biked to the University Centre to go social dancing. It was my last chance for about three weeks. Never mind that I was exhausted!

The next day, I met up with Damjan in London. We saw the afternoon matinée of We Will Rock You. It was really good. I had no expectations going in and enjoyed it hugely. The female lead character (‘Scaramouche’) did the sarcastic funny thing really well. The male lead character (‘Galileo Figaro’) was suitably clueless.

You know, I didn’t realise how many Queen songs I knew.

I was riding home from the Cambridge train station, looking forward to finally getting a proper night’s sleep after a week of frantic socialising. As I was biking north, at the corner of my eye, I spotted Yap riding south along the footpath.

‘Joan! Do you know…’ Yap’s voice faded out as he zoomed by.

I squeezed the brake and stopped, pulling my bike onto the footpath. Yap and I met each other a few metres later.

‘Are you going to Arun’s thing?’ Yap asked.

‘What thing? I’ve just come back from London.’

‘Oh! It’s Arun’s birthday. I bought a cake,’ Yap said, gesturing to the bag in his bike basket. ‘They’ve been at a pub near here since about nine. Do you want to come?’

I didn’t think too long about it. ‘Okay.’

In my opinion, cake is a good enough reason for delaying sleep for a bit longer.

It was 9 PM when Toria came into the lobby. The girls had assembled to discuss our evening plans. ‘Hi girls,’ Toria greeted us. ‘You know, the boys are downstairs in the pool. In the jacuzzi, in fact. It looks very funny.’

‘Really?’ I laughed. ‘Anyone got a camera? We should take a photo.’

Toria handed me her compact camera and we trooped downstairs to ogle.

We found Ian C, Abdel, Chris, Eskandar, Yap, Owen and Joe in a ring at the perimeter of the round spa. Duane was smack bang in the middle, like the hub of the strange bubbling wheel of engineering man-flesh.

I giggled like a schoolgirl and snapped two photos.

While Toria and I were loitering at the door to pool, Kiki rushed in.

Duane rose a little out of the spa. He considered her announcement briefly, then said, ‘H8 to E8.’

‘H8 to E8,’ Kiki repeated. She rushed back out. Toria and I followed her as she mumbled ‘H8 to E8’ all the way to the bar, where Arun and Markus were waiting in front of the chess board.

‘Ah! Told you he’d do that!’ Arun exclaimed, as he shifted the piece.

She was about to run off when Arun said, ‘Hold on! Let’s think about this…’

I shook my head in amazement. I knew Duane was the National Jamaican Chess Champion and had already crushed the best chess players in Cambridge, Oxford and London. But playing chess through Kiki-graph while lounging in a jacuzzi? That is truly boggling.

‘What I want to know is, what have the Romans ever done for us?’

I flipped around to look at the questioner, two bus rows behind me. We were halfway through the exhaustingly long road trip and I was glad to be distracted by Gareth’s question. Gareth is the lone non-engineer on my course.

‘Erm. Roads? Sanitation?’ I suggested. Engineers are pretty keen on these sorts of things.

Gareth (a physicist) waved these off.

The contributions were coming in thick and fast. All were summarily dismissed. ‘Just minor civilisation building stuff,’ was the critical evaluation.

‘What about the calendar?’

Gareth brightened. ‘Yeah, okay. The calendar was pretty good. I’ll give them that.’

‘And blood thirsty spectator sports?’ I murumured. But it was too late and the conversation had moved on.

I have been missing BBQs. Back in Australia, it’s summer and we would have had two or three BBQs by now.

Cambridge weather is fickle. After a week of sunshine, the temperature plunged. We even got sleet.

Today, though, spring fought back. Brendan celebrated his birthday with the first real outdoor BBQ (we had an indoor one at Ian’s place on Australia Day in January). Mmm, roasting meat… 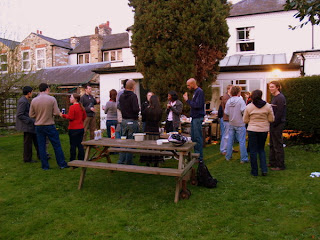 The party begins. This is Brendan’s backyard. 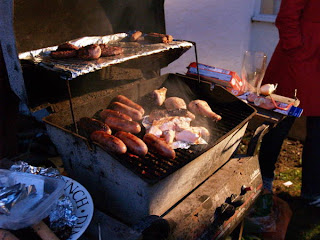 It was a generous BBQ, with sausages, hamburgers, chicken, veggie burgers… 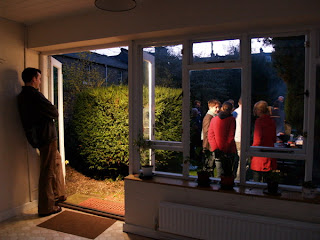 We hovered between indoors and outdoors, depending on the temperature. 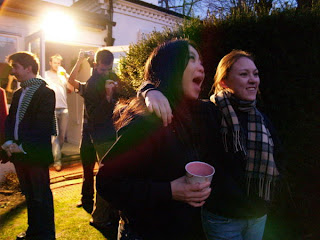 Don, Tommy and I were preparing for our final presentation for the Systems Dynamics class.

I have another module to do next term, but for most people in my course, this Lent term was the last term with taught classes.

“Ever?” I laughed. “You mean you’re done with the MPhil? Done with postgrad? Done with school?“

Our group of three girls and two boys were having a council of war on the train. We were on our way to London to meet our project client. Hopefully, this meeting would clear up the project brief once and for all. The fuzziness of our task was starting to worry us all.

“I hate to change the topic,” Toria said, during a break in the intense conversation. “I just wanted to ask if Gina or Joan have some hand cream.” She looked at her hands, dissatisfied.

“Me neither,” I replied. “…Maybe you should ask the boys?”

Chris was silent for a few moments. “Actually, yes…” he said at last, reaching into his black messenger bag.

“I’m going to Copenhagen after the meeting!” Chris protested. “It was in my toiletries bag.”