Now that I am home, I have been having treats for breakfast — steamed buns and filled coconut rice rolls. This has been the only thing that has prevented me from going into Mega Muesli withdrawal. Mega Muesli is the best muesli in the world. I discovered it at Arjuna Wholefoods early on in my year at Cambridge and quickly graduated from a 1 kg pack, to a 2 kg pack. By mid-year, I was going into the shop for 4 kg packs of Mega Muesli every two months.

Brad was amazed that I bought the 4 kg packs.

Damjan visited me in Cambridge every month or so. He generally took a pack of Mega Muesli with him on the 3.5 hour bus trip back to Oxford. During February, Damjan called the day before I was to visit him at Oxford.

“Bring some muesli?” I interrupted.

“I know what you like, Damo. I already bought it. Guess what it said on the poster board outside Arjuna when today?”

“Valentine’s Day: Say it with muesli!”

As Damjan began laughing, I added, “I’m saying it with 4 kg, the biggest there is!”

The final time Damjan visited to Cambridge, he came to help me pack to leave for a temporary move to Oxford. We stocked up with one final 4 kg muesli pack. We would have bought another pack but unfortunately, I had too much luggage.

I had talked to mum and dad on the phone about what I needed to bring home to Australia.

“Remember to bring any clothes you don’t want to wear anymore,” Mum reminded me.

Mum continued, “Bring your watch too so we can change the batteries. And, well…” Mum hesitated. “No, I guess you can’t… bring some muesli?”

“Probably not through quarantine,” I said, surprised that mum remembered the muesli from when they visited me in April.

“Ah well.” She sounded regretful. “That really was nice muesli. It had a good mix of nuts and fruit and things.”

Yesterday, I handed in my dissertation. I’m happy with it. The thing I worried most about my research (and all my work at uni and as a consultant) is that I’ll write a report that says nothing new or useful, and that it will sit on a shelf somewhere gathering dust. I am, however, happy that I’ve said something interesting. Enough people have read it that I think that it might even be useful. So I have achieved everything I want from this year.

I said goodbyes. Many of those goodbyes were final. I’ve never said so many final goodbyes before. It was a strange, sad feeling.

After I gave in my work, Damjan and I packed up my room and much of the house. It took longer than I expected and I was frantic, worried it wouldn’t get done before we had to leave Cambridge. There were so many bits and pieces that I forgot I had — bank statements, chargers, computer warranties, souvenirs… But it all got done and as the taxi pulled up to the bus stop with two giant suitcases, a medium-giant backpack, a small backpack, and a shopping bag, my agitation melted away.

I am now at Damjan’s house with a cold but without any worries.

I will write again this week. Bye!

The beginning of the end was when I tapped out my last paragraph and did a final proof-read.

The middle of the end is now. I printed my work and today, sent it to the binders.

The end of the end is next Friday, when I pick up my hard-bound, gold-crested, no-expense-spared dissertation and hand it in to the department.

I’ve just finished my last paragraph of my dissertation. It means that the most difficult thinking is over. I am now up to editing, which essentially involves finding ways to delete a quarter of what I have written. Hopefully, that means the best work remains.

I do lots of fun things. Two weeks ago, I went to the Lake District (my second visit) to look around the town of Ambleside. The next batch of scholars are coming to Cambridge in September and will spend four days kayaking, hiking, and building giant newspaper towers at the Lake District.

Rachel, Tristan, Danielle and I hired a car and made the five hour trip north. We wandered the town, scoping out any pubs that could handle a hundred post-graduate students, visited the home of the ‘best gingerbread in the world’, put together a treasure hunt, and toured a countryside mansion. We spent the night at Ambleside YHA, which will be hosting the camp in September.

Here is the view ten metres from the front door of the YHA. 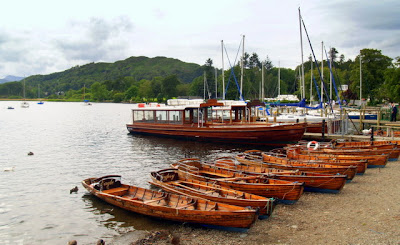 And I’ve been so careful, checking the machines carefully before I leave. The sock is probably fell out of my laundry bag somewhere between my house and college laundry room. That’s a 500 m trek.

My poor sock, lost in the wilderness of Cambridge.

I am the technology officer for the student council of our scholarship group. This week, I’ve been trying to figure out why an email list I set up for the 111 incoming scholars wasn’t working. Today, I finally fixed it and sent this message to check.

It is a beautifully sunny day in Cambridge today. East Anglia (the region where Cambridge is) has the lowest rainfall in the UK, so you will avoid the drizzly weather that UK is known for, to some extent.

Our good friends at Oxford were flooded this year, as was much of southern UK. Someone told me that Cambridge does not flood because we are obviously the 'higher institution'.

I did something useful today. I went into ‘internet lockdown’, yes sireee… I sat in my room with its super fast internet connection and its handy dandy internet cable plug thing and I UNPLUGGED MYSELF! I didn’t check my email for six hours! ooooooooooooo….. And I’m gonna do it again tomorrow!

I learned something interesting about flights and market segmentation yesterday. I talked to a travel agent about flight prices. I knew that somehow if you booked early enough, you got cheaper tickets. How does that work? Does the airline go, ‘Okay, a month before take-off, all the prices go up! Suckers, those people who don’t book early!’

In fact, the rules that govern the system are different, even if they appear to have the same effect. What the airline does is release all its seats at different prices. I don’t mean that seat B2 is more expensive than AK5, no. What they do is, ‘Okay, a hundred seats will be on sale for Â£400, a hundred will go for Â£450, another hundred for Â£600…’

So, yes, your chance of getting a cheap flight does improve if you get in early but the availability of the cheap fare also depends on demand. I mean, how many people would be the same seat for Â£450 if they can get it for Â£400?

So the question remains: Why do airlines do this? Is it to capture the poor-but-organised segment of the market (like concession fares for movies)? Is it to encourage people to book early? Is it to entice travellers if the market demand is low? Is it to make money from desperate or disorganised people who book two weeks before the flight?

It is an interesting and clever business model…

An important part of doing research is, of course, working with your supervisor. I’ve had three or four meetings with Dr F during my research. He talks me through developing ideas, reviews my work quickly, and is encouraging.

Before he went on two weeks leave, I met Dr F to talk about a very rough draft I had emailed him three days before. He was satisfied with my progress but recommended I extend myself by building a formal systems framework around my project.

I felt a bit anxious that I had to do so much work in the last few weeks of my course but I felt like I should try out his suggestion.

I spent a whole day doodling a systems map and staring thoughtfully at the computer. My eyebrows were furrowed for three days. Tonight, finally, I came up with something exciting, even useful! I am so pleased. I think this will make my dissertation much better.

Last week, three of my classmates had their birthdays and booked out Darwin College’s island for a celebration BBQ. That’s right, Darwin College has an island in the River Cam. Here is a picture from that day, with kind permission from two good friends.

On the left is Jen. She’s from the US and had just had a haircut from Letty, who you’ll remember from earlier this month. It’s a beautiful haircut, no? Jen says that she donates her hair to Locks of Love each year. Being away from the US, she will have to post her snippets to them this year.

On the right is Cobi, from Adelaide and therefore my neighbour in a global sense. You might know her writing from here and here. And here. She is a science journalist and has taught me the unnecessariness of the word ‘locate’. Cobi is a charming young lady with job and research offers coming out of her ears. 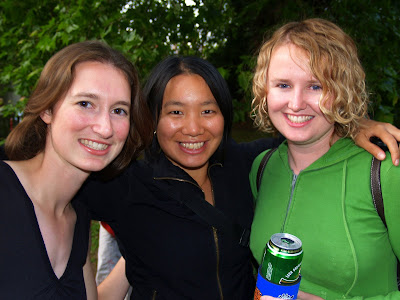 While partying on Darwin Island, someone pointed out a small bridge going downstream.

‘There’s another island there,’ he said. ‘That’s the illicit sex island.’

Of course, the first thing I wondered was if it was an ‘illicit sex’ island or an illicit ‘sex island’. Then I wondered if there was a difference.