We drove to Leitchville, a tiny town of about 500 people. Why were we in Leitchville? Because it was the nearest town to the middle-of-nowhere place we had to go to. We were there to meet David, who was going to give us a tour of the Pyramid Creek Salt Interception Scheme.

“Meet me in front of the pub,” David had said. “You’ll know which one it is. It’s the main building in town.”

We pulled up in front of the pub and parked alongside another car and a van. On the other side of the carpark, David waved to us. After a short discussion, we hopped into his car and started the twenty minute drive to the Scheme.

For the next two hours, David showed us the structures that they used to control the flow of Pyramid Creek. He took us to the pumps that sucked salty water out of the ground before it flowed into the creek. Jamie and I tasted the groundwater — it was almost as salty as sea water. David then drove us to the evaporation pans: 200 hectares of pooled water, waiting for the sun to evaporate it and leave behind white crystals of salt. The salt is then processed and sold as gourmet salt, amongst other things.

We were almost finished when my mobile phone rang. I was surprised I was even getting reception.

“Joan? This is Michael from Avis. Do you have one of our rental cars?”

“Yes, we’ve had it for about two months.”

“Is it parked in front of a hotel?”

I was confused. We had left our hotel in Shepparton this morning. “Um. You mean, a hotel in Leitchville?”

“Yeah, Leitchville. We’ve just had a call from the hotel owner. He’s going to tow your car away in fifteen minutes.”

“He says that you’re parked in a loading zone and a truck is coming to make a delivery. If the car isn’t moved in fifteen minutes, he’ll get it towed away. I’ve got his mobile number. His name is Ryan.”

“Oh.” I racked my brains. “We’re not actually in Leitchville at the moment. I don’t know if we can get there in fifteen minutes. But, look, I’ll deal with it. Could you give me the number?” I scrawled the number down on a media release about the salt interception scheme.

I hung up and called ‘Ryan’.

“Hi Ryan. My name is Joan. Avis called me to say that our car is blocking the way in front of the pub.”

“Yeah, a little silver car? It’s in the loading zone. The beer truck is coming. I need to get it moved.”

“We can get there in twenty minutes,” David murmured to me.

“Oh, I’m sorry,” I said into the phone. “We didn’t realise. We’ll be there in fifteen, twenty minutes to move the car. Is that okay?”

“Yeah, no worries. The truck will arrive about then.”

We wound up the tour and got back to the Leitchville pub in 17 minutes. Jamie hopped out of David’s car.

“I’ll move it and go into the pub to let them know it’s been moved,” he said.

“Thanks, Jamie. The guy’s name is Ryan.”

Jamie tells me later that when he went into the pub, it was like a scene from a Western film, when a stranger walks into town.

“I walked in,” Jamie recounted, “and everyone turns to look at me, dead silence. I said, ‘Uh, g’day. Is Ryan around?’ and they all pointed to him.” 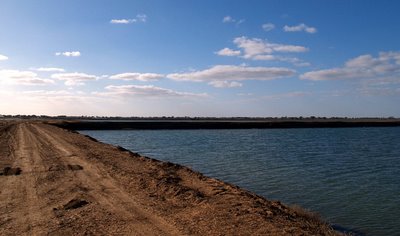 An inland ocean near Leitchville

For my work in Shepparton, I speak to many farmers and country people. I’ve lived in cities and suburbs my whole life. This is something I have to confess to people so that I can explain my ignorance of basic agriculture, geography of regional Victoria, even Australian slang.

Jamie has been my first line of defence in this new environment. He grew up on a farm in south-western Victoria. Often, I let him do the banter and questioning while I sit back and absorb as much information as I can without revealing my city girl cluelessness.

I am grateful that I have had this opportunity to learn more about rural life. I don’t want to be an ignorant urbanite spouting off about water being wasted through irrigation, over-fertilising of crops or vegetation clearing.

Jamie tells me stories about about growing up on a farm.

“The farm back home isn’t big. We grow lavendar, also some beef cattle. Sometimes when a cow has two calves, she’ll pick one to look after and abandon the other. The abandoned one doesn’t last long. It’s just the natural way of things.

Sometimes, though, when dad felt like it, he said to me and my brother, “Josh, Jamie, if you want, you can look after the calf.”

Josh and I would come back after school every day to feed it. It was really cute, looking up at us with its big cow eyes. We were its ‘mum’. It would come towards me and nuzzle my leg. Every time, it would be looking for my udder.

I would hold my hand like this and it would suck my fingers. You have to be really careful, though. You have to have your hand palm upwards. Cows have strong mouths. If you held you hand like this, with the fingers facing down, the calf would snap your fingers backwards when it sucked.”

Goodness. With my newly acquired knowledge, I felt my giant block of city ignorance chip away just that little bit more.

There’s a lake near where I live in Shepparton. We try to go for a jog around it in the mornings at about 6 AM. I used to run one lap while Jamie ran two, however, I found that I could probably run 1.3 laps instead of waiting until Jamie appeared around the bend.

One morning, I decided to do an extra loop in the far south-west corner of the lake. There’s a bridge that cuts across a section so I thought I could cross it a few times to add some distance to my run.

It all went to plan until I headed back towards the main trail. Suddenly, my foot had caught on something and I was falling. Instinctively, I put my hands up to protect myself before I hit the gravel.

I bounced back upright before the pain hit my palms. Winced. Couldn’t see the damage in the dark. I hobbled back to see a low hanging chain between two posts. It was less than a foot off the ground.

I brushed the stones and dirt off my palms as I slowly walked away. In two minutes, I was jogging again, more slowly this time.

The sky was lighter when I got back to our starting point. I rolled up my pants leg and saw a long gash of blood. It was shallow. Nothing as bad as the last time I fell.

Now, that would have been the end of it except for this postscript, the kind of postscript that often happens to Joan. An hour later, we were back at home getting ready for work. I grabbed my handbag and checked that I had the essentials.

Uh oh. Where was my phone?

Oh, I knew. I knew exactly where it was. Lying in the gravel near the south-west corner of the lake.

“Jamie, this is going to sound stupid. I think my phone fell out of my pocket when I fell over at the lake.”

Jamie stopped immediately. “Oh no! Are you sure?”

“Yeah… Do you think we should get ready for work then go back and find it?”

“No, I’d go straight away. There were a lot of walkers this morning. Do you want me to come with you?”

“No, I’ll be right. Where are the car keys?” I grabbed a fleece jumper, shoved my feet into sneakers and ran to the garage.

I parked as close to the western end of the lake as I could, got out of the car and started running — for the second time this morning. I wondered what the people who saw me thought, this girl in black dress pants and a shirt, with a baby blue polar fleece top and blue sneakers running around the lake at 7:45 AM.

I was lucky. The phone was still there.

At the start of the week, Jamie and I drive north for two and a bit hours. We do mildly confusing work for another company, then drive about twenty minutes to our apartment.

We’re in a new apartment every week. They seem to get better and better. The one we were in this week was really a house with a full kitchen, king sized beds, thick fluffy towels and complimentary chocolates.

Even better, there was enough space for me to teach Jamie how to cha cha and samba. We spend a third of the evening cooking, the second third dancing, and the hours before sleep time playing the guitar and singing.

Consultants are renowned for being expensive. If you have a senior engineering consultant come into your company to run a half day workshop, don’t be surprised if you’re hit with a $1500 bill, and that’s not even including preparation time and travel. It’s even more expensive if you ask an accountant or lawyer to do the same thing.

There’s a crazy arrangement called ‘secondment’, where companies pay a particular consultant to work for them full time. It’s like getting a new (competent) staff member except that you’re paying them a lot of money per hour. It will cost you five times more to have a consultant on secondment to you than for you to hire a proper new employee. So I don’t exactly understand what motivates companies to request secondees.

I’m going on secondment on Monday. I will be working from Shepparton for at least the next two months. Shepparton is about two hours north of Melbourne. I’m excited about going. I get to set up an apartment for myself and a workmate. I have the gadgets and wheels I need to do my job. I even have a generous food allowance.

I hope to organise regular internet access while I am away. The internet, even now, is a lifeline to me. I would feel lonely without you, my blog readers, my email-pals, and my Google-talk buddies.