Five of us plus Mia arrived at our favourite Vietnamese restaurant. We were a bigger group than usual so the waiter seated us upstairs, where there are round banquet tables.

Damjan looked around and said, ‘I think there are more Aussies here today.’

Dad replied, ‘No, this is normal. They always put the white people upstairs.’

‘Because white people eat slowly. They put them here to avoid clogging up the busy tables downstairs.’

I haven’t written much since my update on being pregnant. I’m glad to say that the birth went well and baby Mia will now feature on this blog.

It’s a steep learning curve, becoming a parent of a newborn. We’re fortunate that some of our friends have gone up this curve recently and their advice has helped pull us up with them. The first three weeks were like spinning plates. It wasn’t till week four that I felt like I could go outside with Mia without the plates coming crashing down.

Once we had mastered one thing, the next challenge came upon us. Here are the things that worried me in the order they came:

This was stressful and often painful. I got a lot of help from our Council’s breastfeeding clinic and the Australian Breastfeeding Association. I am now a member of the ABA. I highly recommend calling their hotline whenever you need help.

Babies often sound like they are choking, gasping and burping. They cry. If things are particularly bad, it may be due to reflux (their food coming up from their stomach and hurting them). I worried that Mia had reflux and that she was in pain. Her wind stopped her from sleeping. We are lucky, though. Her digestive system seems to have matured quickly and she now has no problems with wind. Many three month old babies continue to suffer.

I was anxious about going outdoors by myself because I couldn’t attach our pram bassinet to the wheels, and I couldn’t get the pram up the steps of a tram. Now I know how to assemble the pram and I know which tram stops to use so that I can wheel the pram straight on. However, the real breakthrough has been ditching the pram for a baby carrier, which straps Mia to my chest. I use the Baby Bjorn for short trips and the Ergo Baby carrier for long walks.

I am obsessed with making sure Mia gets enough sleep. It used to take us up to 45 minutes to settle her to sleep. I felt like an incompetent parent, as I read about other babies that could be put in their cots and fell asleep without constant patting. Since week 12, we have made great progress and Mia can now put herself to sleep most of the time.

I got a blocked duct and mastitis (an infection) in one of my breasts. Although the duct is now clear, my milk supply in that breast has plunged. For the past month, I’ve been trying to increase my milk. I’ve had an ultrasound to try to work out what’s wrong. But there is no explanation and no cure. It’s just one of the many mysteries of breastfeeding. I’ve now mostly made my peace with this. Mia is getting enough milk from my other breast and that’s the most important thing.

We’ve overcome the five challenges above. There’s nothing worrying me at the moment. It’s taken more than three months but I now feel like I know what’s going on.

To end on a positive, here is how Mia has evolved from newborn to what I now think of as a rather large baby.

Damjan’s family celebrates St George as their Slava (Patron Saint Day) on November 16.Â  This year, Mira taught us how to make Slavski kolaÄ, the special Slava bread with its own Facebook page.

The bread is highly decorated, and in our case, slightly sweet and lemony.

Damjan and I are teaching Rachael and Julian a waltz for their first wedding dance.

‘Hmm,’ I said, pondering the step that Rachael and Julian had dutifully taken on my instructions.

‘I think it’ll be too slow to do it the way I said. Instead of doing a full L-shape, try sweeping your foot diagonally to land to the side.’

Here is the way I originally described the basic waltz step.

And this is what I showed Rachael and Julian to do instead.

Julian made the switch quickly and was soon keeping up in time with the music.

‘That’s great, Julian,’ I said. ‘Rachael, remember you don’t need to bring your foot right back, just go straight across.’

‘It’s like sweeping your foot over a soccer ball,’ Julian said helpfully. ‘That’s the way I think of it.’

I was on the phone with mum.

‘No, I don’t. But Damjan eats it sometimes,’

‘I didn’t like vegemite too,’ she continued. ‘But a while ago, you left a jar of vegemite at our place and I tried it. Now I like it.’

‘It’s just like putting soy sauce on bread!’ I exclaimed.

‘Huh? Fear of the number four?’

‘Yes! Yes, you’re right!’ My dad and I immediately knew what she meant.

Cantonese people will do everything they can to avoid the number four in house numbers, number plates, phone number and birthdays. In places like Hong Kong, Box Hill and Richmond (mini Hong Kongs in Melbourne), you’ll find that flats go from 3 to 3a, then 5. Buildings don’t have floors 4 or 44. All this quadrophobia is because in Cantonese, the number four (shi) sounds like ‘death’.

I found two definitions for quadrophobia. Urban Dictionary says that it’s an irrational fear of things that come in fours, then give an example of someone who didn’t want to see a band with four musicians. The Wall Street Journal says that companies are quadrophobic because the number 4 only appears 8.5% of the time in quarterly earnings figures, instead of the expected 10%. It turns out that companies are rounding 4s down.

No mention of the widespread quadrophobia of Cantonese people. I like mum’s explanation best.

Today, I took my bike out for the first time in two months. Despite the interval, I could still more or less expertly unfold it and launch onto the road.

However, I was terribly wobbly. I almost immediately veered into the queue cars and vans parked along the street. How could my riding have become so rusty in two months?

I hopped off the bike and lifted it to the curb. Ten seconds inspection revealed the problem. The front tyre was flat.

I wheeled my bike to the second-hand bike store where I had bought my lock and lights. A man with a Canadian accent and two centimetres of cigarette butt in his hand helped me attach the bike pump to the wheel nozzle thing.

‘I haven’t ridden it in a while,’ I said hopefully. I hoped it wasn’t a flat. I don’t know how to fix those yet (Damjan did buy me a book, I’m sure I can look it up).

‘How can you tell?’ I asked. ‘If there’s a puncture, I mean.’ For some reason, I had a mental image of putting the tyre in a bath tub of water. It just flashed into my mind and I didn’t have time to figure out what it meant.

He said, ‘If it’s flat again tomorrow, then you’ve got a puncture.’

I took this to mean that it’d be fine for me to ride today, and so I continued on my planned 20 km ride along Regent’s Canal and Victoria Park.

It was cloudy but dry, a good day for cycling except it became chilly by late afternoon. Also, my helmet was probably on too tight so my head hurt.

Tomorrow, I will squeeze the front tyre to see if it’s lost much air. In the mean time, I’ve been pondering the strange mental bath tub image. I now know what it means.

As kids, Jason and I had a number of blow up vinyl toys (didn’t everyone?). For example, we had blow up baseball bats, which we used to swat each other.

Once a few rounds of swatting had occurred, these inflatables would eventually start losing air. I remember dad taking various inflatable toys to the bathroom, putting them in a full bath tub of water, and squeezing them. We then followed the stream of bubbles back to the indistinguishable location of the leak.

The inflatable was then dried and patched with sticky tape. And thus, it lived to fight another day.

I have been eating ‘spicy eggplant stir fry’ all week. It’s a recipe from bowl food, which my ex-housemate Richard gave me for Christmas.

I had bought all the ingredients on the weekend and was talking to mum on the phone about the recipe.

‘Sounds nice,’ mum said. ‘But if you fry eggplant, it will soak up a lot of oil. It’s not very healthy. Why don’t you bake or steam the eggplant instead?’

Later, Damjan confirmed it. ‘Well, yes, eggplant probably will absorb a lot of oil. That’s what makes it taste nice!’

However, in the interest of health, I decided I would take mum’s advice and steam the eggplant before frying it in the wok. I don’t have a steamer but I do have a rice cooker and a flat bottomed round metal container sized such that it would sit snugly in the rice cooker. The combination is an ideal no mess double steamer.

The experiment was successful, very tasty. You can recreate it yourself.

Steam eggplant until soft (or fry in oil and use paper towels to absorb excess oil).

Then fry the sauce and eggplant together. When finished, mix in the coriander.

The coriander is very good. I think it made the dish taste nice. Serve with rice.

Update
I sent this recipe to my mum and she immediately tried it out. She wrote:

‘Joan, I have just cooked the eggplant stir fry recipe that you gave me. It’s very tasty. For the next party I go to, I will bring this dish. Have a look at this photo. Is it like yours?’

Mum, I’m glad you liked the recipe! I cut my eggplant into smaller pieces. I think your eggplant dish is more beautiful because of the dash of fresh green coriander sprinkled on top and it’s in a pretty bowl.

A question from Jason, my brother.

You know that short story we read ages ago?
It had to do with the evolution of God.
Starting off with humans wanting to calculate entropy (or something like that) – and they built a computer, and the computer couldn’t do it, so it built a successor. Computer after computer, until eventually the computer was smart enough to figure it out – but existed only as pure energy. Unfortunately by the time it figured it out, there were no humans to tell, so it said “Let there be light..” and the process started again.

That short story – remember that? I’m trying to find it, any clues?

I was thinking about this story a while ago and I couldn’t remember where it had come from. I think it was by a famous science fiction author.

…I think it’s this one!!! ‘The Last Question’ by Isaac Asimov, indeed a famous author. http://www.multivax.com/last_question.html

One of the best science fiction short stories ever. Read it!

that’s it! good find. how’d you manage that while typing an email??

I was enjoying yum cha at a Chinese restaurant in Bayswater, west London. Yap said to me, ‘Do you know that word?’ He pointed to this character. 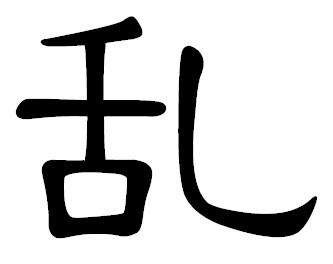 ‘Luàn,’ I read. I knew this word. My mum had always lamented at how luàn my bedroom was. ‘It means messy.’

‘Ah,’ Yap nodded. He smiled. ‘Are you sure?’ Yes, I was sure, but then Yap pointed to the small print underneath the character. 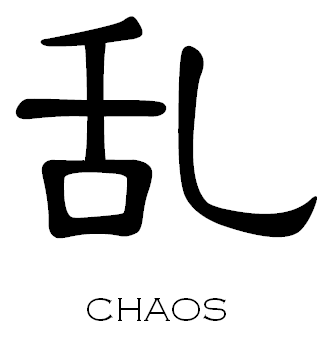 Oh. Perhaps my mum had been more distressed about the state of my room than I thought.